The mission of the Bishop Sarah Frances Davis Foundation is to transform the lives of orphans, vulnerable children and women by providing funding for housing, healthcare and education.

The Right Reverend Sarah Frances Taylor Davis, the 126th elected and consecrated Bishop of the African Methodist Episcopal Church was born an identical twin to Cornelius and Thelma Taylor on February 4, 1948. Her mother, Thelma Levy Taylor died shortly after giving birth. She and her twin sister, Carol Temperance were raised their father, Cornelius and stepmother Betty Jean Malvo Taylor, along with two loving grandparents Granville Charlie Taylor and Sarah Joiner Taylor. Her paternal grandmother, “Mama Sarah” for whom Bishop Sarah was named, had a major influence upon her life and spirituality.

A dedicated servant of the Lord from early childhood, Sarah grew up in the New Sixth Street Baptist Church in Port Arthur, Texas and was baptized at the age of twelve. She was a gifted musician, a member of the choir, the Girls’ Auxiliary and traveled with the Young People’s delegation as a participant in the Baptist State Convention.

Bishop Sarah has always been a trailblazer, having served as the Texas State Student Council President during her high school senior year which allowed her to travel extensively throughout the state of Texas and Washington, D.C. She shared Lincoln High School, Class of 1966 co-valedictorian honors with her twin sister Carol Temperance Taylor. After high school graduation she matriculated at North Texas State University in Denton, Texas, graduating with a degree in mathematics. She would go on to earn a Master of Science degree from Pace University in New York.

When Bishop Sarah moved to San Antonio, TX, she maintained active membership in the local chapter of Alpha Tau Omega, until her initial Episcopal assignment to the 18th Episcopal District, in southern Africa. Bishop Sarah was a lifetime member of Alpha Kappa Alpha Sorority, Incorporated.

Her academic and business acumen would propel her into the high-powered boardrooms of corporate America. Intelligent, innovative and favored of God, Sarah progressively moved up the corporate ladder – reaching the level of District Manager at Southwestern Bell before hearing the voice of God – calling her into a lifetime of transformative ministry. Sarah left the business world and entered seminary, earning a Master of Divinity degree from Houston Graduate School of Theology and a Doctor of Ministry degree from Southern Methodist University Perkins School of Theology.

Love, Marriage, Children, New Church and a Call from God

On June 20, 1970, Sarah married the love of her life, Claytie Davis, Jr. and to this union was born two sons, Claytie, III and Corey Barrington Davis.

Also in 1970, Sarah and Claytie united with the Wesley Chapel A.M.E. Church under the pastorate of Dr. E. E. Coates. It was at Wesley that she acknowledged her call to ministry and preached her trial sermon in 1988. In an unprecedented move in 1990, Bishop Robert Pruitt admitted her to the Texas Annual Conference and ordained her as an itinerant deacon at the same Conference. This had never been done before. This would only be a foretaste of what God had in store for this great servant.

It soon became evident that Bishop Sarah was a woman of great faith who believed in the power of prayer. Her journey in formal prayer ministry began when she was appointed District Prayer Leader by one of her ministry mentors, the late Presiding Elder X. L. Williams. She was appointed as the Assistant Director of Prayer for the Connectional Church in 1994 and in 1997 was appointed the Connectional Director of Prayer. Also in 1997, Sarah was appointed by Bishop John Bryant to the historic Bethel A.M.E. Church in San Antonio, Texas, making her the first woman in Texas to be appointed to a major A.M.E. Church. She served Bethel-San Antonio for seven years.

Believing she had heard from the Lord concerning offering herself for Episcopal service, Bishop Sarah announced her candidacy for the office of Bishop in December 2001. Her devoted husband, Claytie was by her side every step of the way. Sarah and Claytie were on a mission to “Transform Minds and Change The World.” On July 6, 2004, just as the Lord had revealed to her, Sarah Davis was elected a Bishop in the A.M.E. Church. Her election made her only the third woman in the 218–year history of the denomination to ascend to its highest level of service.

“An American Went To Africa and Neither Were Ever The Same”

Her first Episcopal assignment was to the 18th Episcopal District, comprised of the Southern African countries of Lesotho, Botswana, Swaziland, and Mozambique. A staunch advocate of empowerment through education, Bishop Davis gave exemplary leadership to over 39 A.M.E. Church-sponsored schools in Southern Africa.

She introduced the first ever summer science and math institute program in Lesotho to globalize and develop the knowledge of students and teachers. She granted a record number of academic scholarships to young people and clergy. During her term, two clerics earned degrees in theology from universities in South Africa and Mozambique and four earned diplomas in Theology in Botswana. For the first time, English classes were provided for Portuguese-speaking lay and clergy persons in A.M.E. Churches in Beira, Mozambique which resulted in many receiving English as Second Language (ESL) certificates.

Also, during her tenure in the 18th District, Bishop Davis was a champion for orphaned and vulnerable children. Under her leadership, the Selulasandla Vashti Village, an 18th District sponsored orphanage, grew in housing capacity from 4 to 21 orphans. In April 2008, Bishop Sarah dedicated the first A.M.E. Church-sponsored orphanage built in the mountains of Mokhotlong in the country of Lesotho: The T’sepong Cecelia Williams Bryant Home.

An Episcopal Season of Trial and Triumph

At the time of her death, Bishop Sarah was serving in her second quadrennial as the Presiding Prelate of the16th Episcopal District, comprised of churches and schools in South America (Guyana and Suriname); Windward Islands (Trinidad &Tobago, Barbados and Grenada); the Caribbean Islands (Jamaica, Haiti, Dominican Republic, and Virgin Islands); and Europe (London, the Netherlands and France).

Bishop Sarah implemented a vision of empowering change throughout the 16th District. On January 12, 2010, tragedy struck, when a 7.0 force earthquake devastated the country of Haiti. Bishop Sarah immediately went to work to galvanize resources from church and government officials to start rebuilding people, churches, schools, clinics and orphanages. She and Supervisor Claytie would fly back and forth to Haiti at great risk in order to ensure that the people they served were receiving the supplies and help they needed. To date, two churches have been completely rebuilt, three significantly renovated and one clinic rebuilt, to the glory of God.

Bishop Sarah was passionate about Kingdom building. Accordingly, she was the current Chair of the Commission on Church Growth and Development. During her tenure in the 16th District, she brought 400-plus members from the country of France into the A.M.E. connection, expanding the influence of the gospel and African Methodism throughout Europe.

Ever the trailblazer and “out of the box” thinker, Bishop Sarah desired to host a connectional meeting of the A.M.E. Church outside of the continental United States in order to expose persons to the amazing people, rich culture and history of the 16th District. Many said it was impossible to host a connectional meeting in Kingston, Jamaica. A connectional meeting had not been held outside of the United States in over 30 years. However, after much planning and prayer, during the week of June 23-26, 2013, Bishop Sarah, Supervisor Claytie and the people of the 16th District hosted the General Board Meeting with excellence and grace, letting the Church of Allen know that “what is impossible with man, is possible with God.”

On June 24, 2013, during this historic General Board Meeting, in Kingston Jamaica, Bishop Sarah was invested as President of the Council of Bishops of the African Methodist Episcopal Church, during a special Investiture Worship Celebration that drew over 1500 persons from around the world.

“A Prophet To The Nations”

Bishop Sarah served as Chair of the Global Development Council (GDC) of the A.M.E. Church from 2009 to 2011. In August 2011, in Durban, South Africa, Bishop Sarah was elected Vice President of the World Methodist Council which links the family of Methodist, Wesleyan and related Union Churches in more than 132 countries with nearly 80 million members belonging to these churches worldwide.

In October of 2012, Bishop Sarah represented the World Methodist Council as a guest of His Holiness, Pope Benedict XVI at the XIII Ordinary General Assembly of the Synod of Bishops in Rome, Italy. She was one of 15 invited fraternal delegates from around the world to participate in the Assembly and given the opportunity to make a presentation to the Synod. 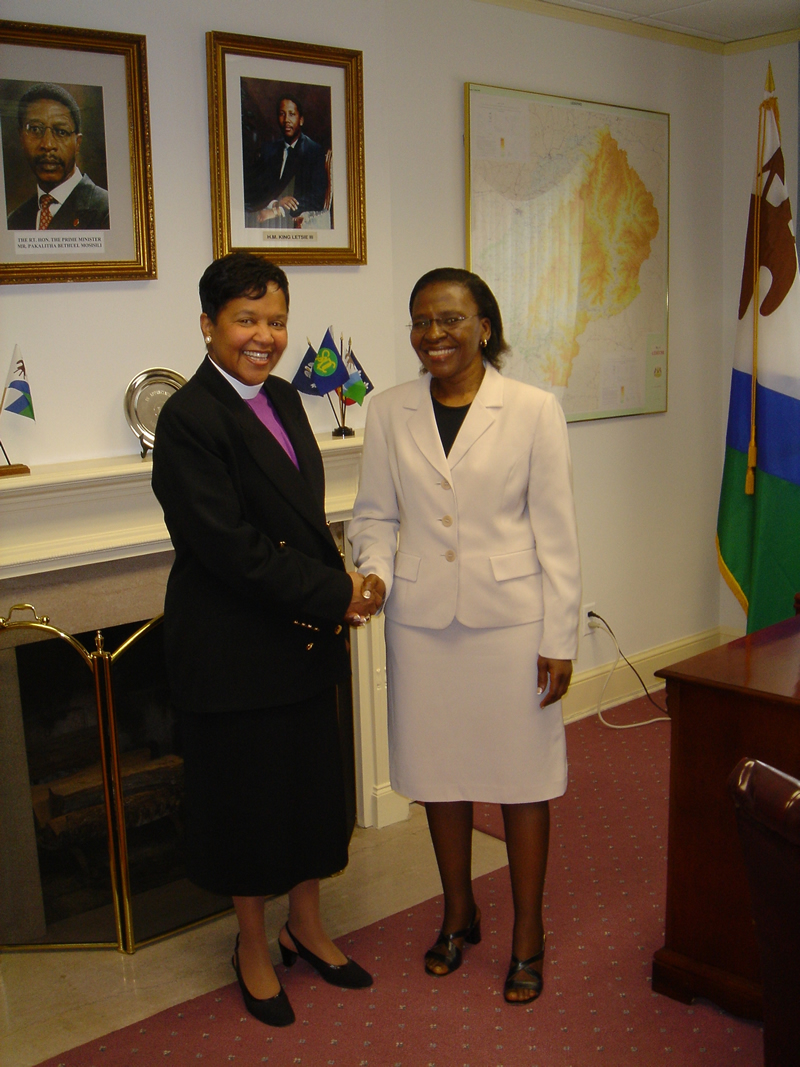 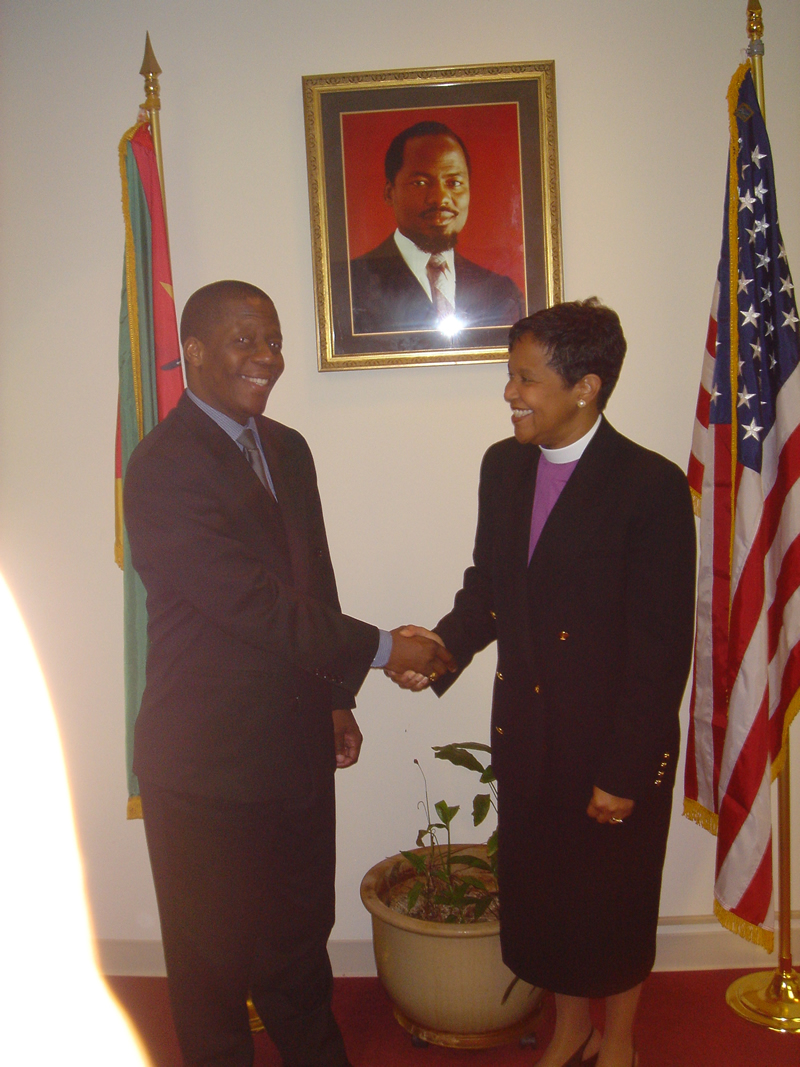 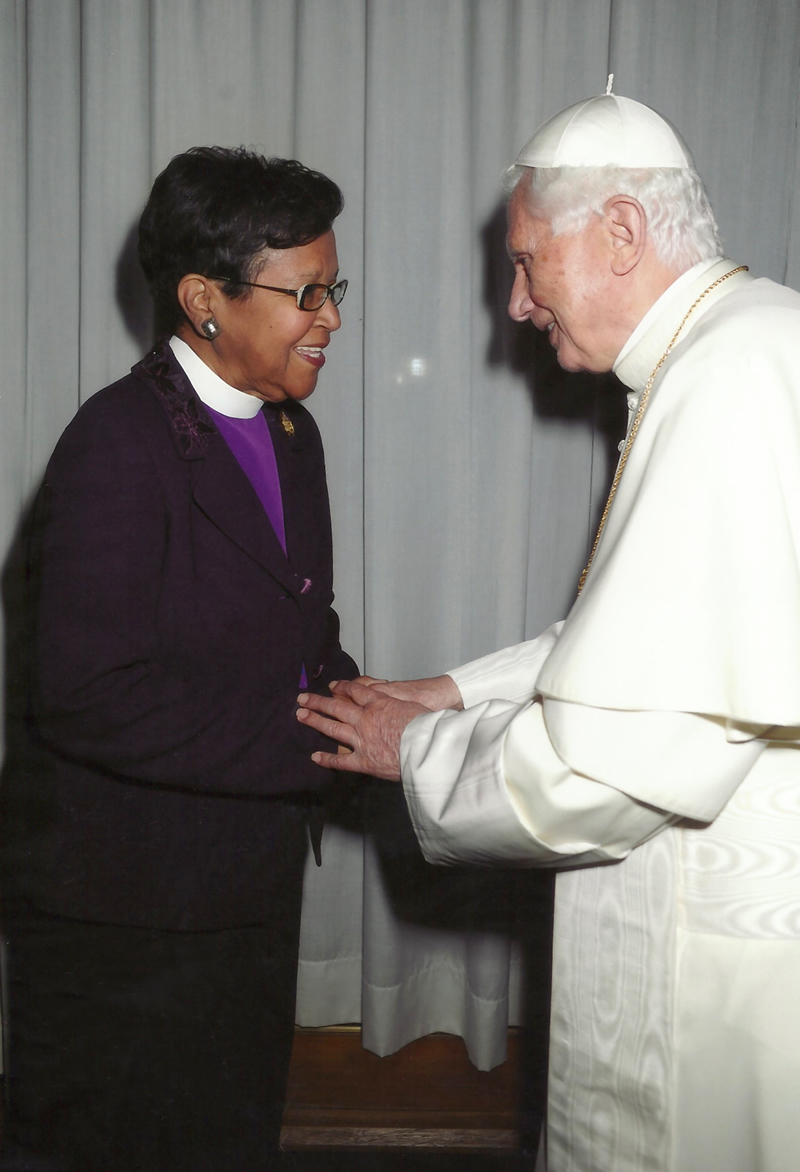 Bishop Sarah with Pope Benedict at the Vatican 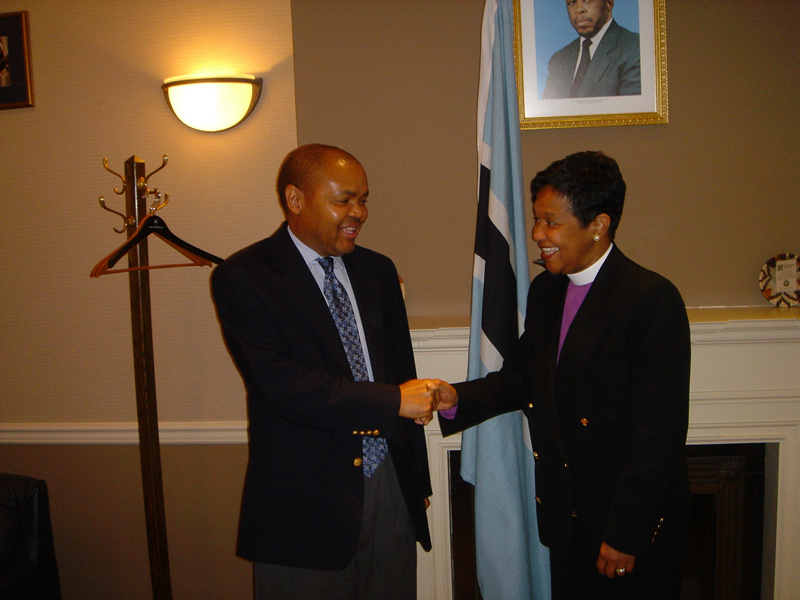 A much sought after preacher, teacher and workshop leader, Bishop Sarah has ministered in diverse venues all around the world. In 2007, at the invitation of King Mswati, III of Swaziland, she was one of three clergy persons to preach at the National Easter Service in Swaziland and she brought the message at the Ecumenical Service of the Centennial Boule of Alpha Kappa Alpha Sorority, Incorporated, July 2008, in Washington, D.C. The spiritual discipline she loved most to teach and preach about was prayer.

Bishop Sarah was affectionately known as the “Prayer Bishop” because of her consistent emphasis on the importance of prayer in the life of the Church. She has organized numerous prayer ministries and sponsored annual prayer conclaves. Bishop Sarah was chairperson of the prayer committee for the 48th Quadrennial Session of the General Conference of the A. M. E. Church. As a result of her leadership, the first Connectional Day of Prayer in African Methodism was held April 13, 2008, and is now an annual observance in African Methodism. 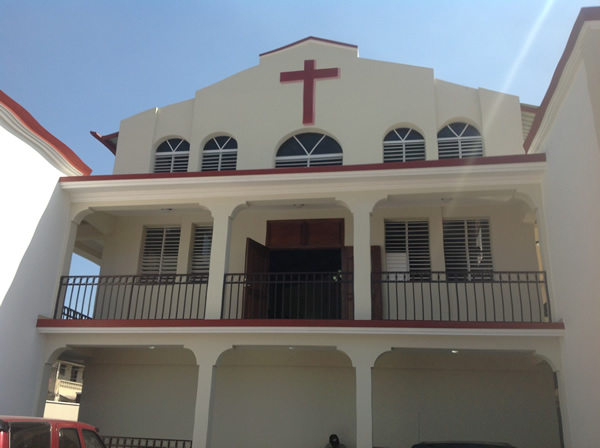